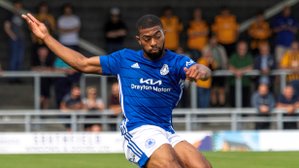 The Pilgrims head to Mill Farm to face AFC Fylde (kick-off 3.00pm) as Paul Cox's side attempt to take another step closer to promotion to the National League.

Fylde received a bye to the semi-finals by virtue of finishing third in the standings – while United were 2-1 eliminator victors over Kidderminster Harriers at Aggborough on Thursday evening.

The result came at a cost with defender Scott Duxbury suffering a facial injury – with Keenan Ferguson deputising from the substitutes' bench.

The likes of Brad Nicholson, Tom Platt, Joe Leesley and Jordan Burrow remain sidelined with a variety of long-term injuries.

Fylde completed a league double over the Pilgrims (1-0 and 3-1) and boast an unbeaten home record against United.

Should the tie be level after 90 minutes, the match will head to extra-time (and penalties if required).

Twitter updates will be available via @bostonunited throughout the afternoon.

KIT WATCH
United will be wearing their away kit of (all) royal blue.