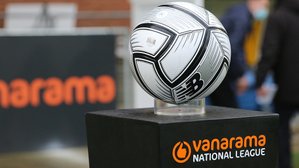 Boston United have written to all existing season ticket holders from 2020-2021 to offer them the opportunity to purchase again for season 2021-2022.

We wish to reward fans who were able to support us last season by purchasing a full season ticket – and who did not request a refund when the season was curtailed.

They now have an exclusive period to renew their season tickets for the new National League North campaign – and details have been sent to all eligible fans.

Renewals from those supporters will be the only ones accepted during this initial phase – with a date and time for the general sale of season to be communicated shortly.